Quinn, who has been the FAI’s interim executive vice president since January, has written to FAI employees to tell them he will step down after announcing last week that interim CEO Gary Owens will not be applying for the position on a permanent basis.

He told FAI.ie: “I have really enjoyed my time working with the talented and dedicated staff at Upstown and now have a better understanding of just how amazing the work they do for Irish football, which is often unknown and always seems to be amid a cloud of job uncertainty.

“When I joined the League with Gary at the end of January, we wanted to protect jobs and help implement a real structural change within the FAI in order to improve the Irish game. With the successful vote for the change at the EGM last Monday and the complete restructuring of the day-to-day roles at Headquarters , The game can now look to a more productive future.

“Although these changes have met resistance from a small minority of voters, the way is now clear for a new CEO to push football forward again. I will stay close to Irish football and wish all of my colleagues good luck in the coming weeks and months as it is implemented. More important changes to make our game and our league strong again. I will remain available to FAI, as required, until the new CEO becomes on site. ” 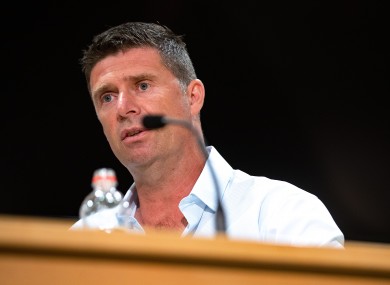 Throughout his stint at FAI, Quinn insisted that the size of the Visionary group had been overstated, and said it had effectively disbanded after its proposals were published last May.

Quinn’s eight months in the Assembly were tumultuous and began when the FAI struck a bailout deal with the state in January. The terms of this bailout caused disruptions among some members of the membership, but it was ultimately passed comfortably in an extraordinary meeting last week.

The former Irish striker was also centrally involved in the re-start of the Irish League season, a bruising operation that ultimately succeeded – if late – with the league resuming on July 31 with a new streaming service, WatchLOI, broadcasting first-division matches. Closed doors. The FAI said it feels encouraged by the number of subscriptions to the service, although it hasn’t released any numbers yet.

The CEO hiring process continues, with a round of interviews conducted last week to shrink eight of the shortlisted candidates to three. Understandably, Olympic president Sarah Kane and Adrian Bevington, who were both members of the Football Association, are in contention for the role.